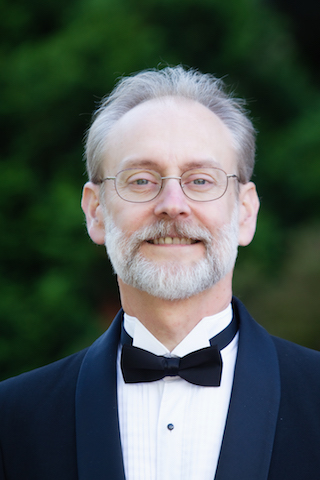 Dr. Stephen M. Hopkins is Director of Choral Activities in the Hayes School of Music at Appalachian StateUniversity, a position he has held since 1992. He conducts the Chamber Singers and University Singers and teaches choral conducting, choral techniques, and choral literature.  His previous teaching experience includes two years as Director of Choral Activities at West Texas State University in Canyon, Texas and seven years of public school teaching in Tennessee and Texas.

A native of Paris, Tenn., Dr. Hopkins holds the Doctor of Musical Arts and Master of Music degrees in Choral Conducting from the University of Texas at Austin and received his Bachelor of Music Education degree from Murray State University.  He is a member of NAfME and ACDA and has contributed articles to the Choral Journal.

In 2006, Dr. Hopkins received two university teaching awards.  He was designated the “Hayes School of Music Teacher of the Year,” an award voted on by the Dean’s Student Advisory Council. He was also chosen as one of seven faculty members honored with a University Award for Excellence in Teaching, a university-wide award chosen by the Faculty Awards Committee.

Dr. Hopkins is a frequent guest clinician and adjudicator.  An active composer and arranger, his compositions have been published by Hinshaw Music, Inc. and Carl Fischer.

Dr. Hopkins has served as Director of Choral Activities for Cannon Music Camp since 1993.  From 2001-2015 he also served as the Director of the camp.