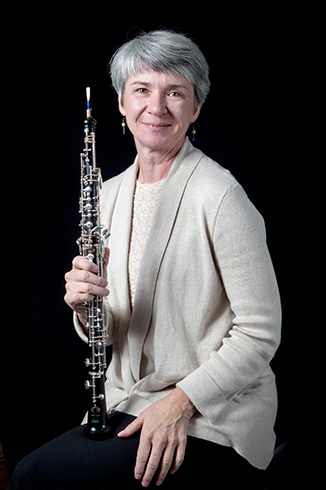 Oboist Alicia Chapman has been on the faculty of the Hayes School of Music since 1998.  She joined the applied music faculty as instructor of oboe in January 2001 and won the national search for the position of Assistant Professor of Oboe in 2015 .  Dr. Chapman is principal oboist with the Asheville Symphony and member of the North Carolina Baroque Orchestra, where she performs on historical oboes.   She served as principal oboist of Harrisburg (PA) for 29 years and as English horn player in the Greensboro symphony for eight seasons.  She has held principal positions with the Bridgeport Symphony (CT), the Stamford Chamber Orchestra (CT), the Connecticut Grand Opera (CT), the Queens Philharmonic (NY), the Heritage Chamber Orchestra (SC), the Amato Opera (NY) and the Masterworks Chorus and Orchestra (NJ/NY).

Chapman performed as a member of New York Philomusica, the Manhattan Chamber Orchestra and New York Kammermusiker, and has recorded on the Dorian and Newport Classics labels.  She has toured internationally as a chamber musician, performing in festivals in Prague, Dresden, and Salzburg. A tour of Southeast Asia with the New York Symphonic Ensemble included concerts in Singapore, Bangkok, Kuala Lumpur, Manila, Jakarta and Bandar Seri Begawan (Brunei).  While living in New York, Alicia Chapman was an extra and sub with the Metropolitan Opera, played for several national tours with the New York City Opera and was a semi-finalist in the 1995 Lucarelli International Competition for Oboe Soloists.

At Appalachian, Dr. Chapman is also the director of the Collegium Musicum and Coordinator of Woodwind chamber music.  She is a founding member of Harmonia Baroque, the Hayes School of Music's resident professional early music ensemble, performing on historical instruments.  Harmonia Baroque brings historically informed performances to concert series and Arts Council venues throughout North Carolina and Virginia.

A native Vermonter, Alicia Chapman began musical studies with Neil Boyer at the University of Vermont. Chapman earned both Bachelor and Master of Music Degrees from the Mannes College of Music and the Doctor of Musical Arts degree from the City University of New York. Her major teachers were Elaine Douvas, Ronald Roseman, and Mark Hill.  She has studied Baroque oboe with Virginia Brewer, Gail Hennessy, Washington McClain, and Marc Schachman.