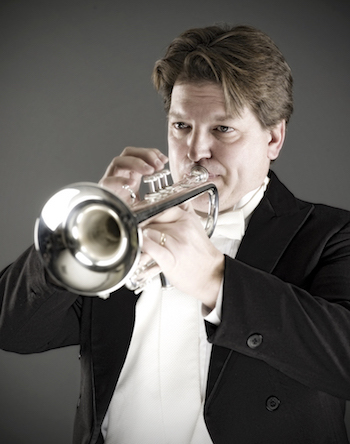 James Stokes is the Professor of Trumpet for the Appalachian State University Hayes School of Music. He holds Doctoral and Master's degrees in performance from The Ohio State University and a Bachelors degree in music education from Indiana University where he studied trumpet with William Adam. He has performed with the Charlotte Symphony, Columbus Symphony Orchestra, ProMusica Chamber Orchestra, CAPA Broadway Show Series, the Piedmont Wind Symphony, and is co-principal of the Symphony of the Mountains. Dr. Stokes has performed with numerous popular, Hollywood, and Broadway artists including John Williams, Doc Severinsen, Don Henley, Frank Sinatra, Jr, Aretha Franklin, Temptations, O'Jays, Mannheim Steamroller, Barry Manilow, Canadian Brass, and others.

James has adjudicated for the National Trumpet Competition since 2001. He is a member of the International Trumpet Guild, performing in Sydney, Australia as soloist and with the Mid-American Trumpet Ensemble (MATE) for the 2010 ITG Conference. He is a featured artist and clinician throughout the US and in Beijing, China. James is a founding member of the New River Brass Ensemble and an Artist/Clinician with the Conn/Selmer/Bach Corporation.

He has premiered many new works for trumpet including: Sonata for Trumpet and Piano by Thomas Zugger (2010), Concerto for Trumpet and Winds by William Harbinson (2011) and Games (2009), a trumpet quartet by Scott Meister. In 2015, he premiered the Thomas Sleeper Concerto for Trumpet and Chamber Orchestra (re-orchestrated for chamber orchestra by the composer) with the Appalachian Philharmonia Orchestra, Thomas Sleeper conducting. Performances of the Concerto for Trumpet and Winds by William Harbinson occurred in May of 2012 with the Indiana Wind Symphony and in June 2012 for the ASBDA National Convention, in addition to the premier performances in 2011. Sound4 performed and held clinics in Powell, WY/Northwest College and Ellensburg, WA/University of Central Washington. The New River Brass Ensemble and HSOM organist Dr. Joby Bell performed a November 3, 2013 concert for the St. Joseph Cathedral Recital Series in Columbus, OH featuring a double brass quintet and organ arrangement by William Harbinson. In addition to hosting the William Adam International Trumpet Festival in 2019, he has been a frequent soloist for the conferences held in Norman, OK, Los Angeles, CA, and in Boone, NC. In 2017, Stokes premiered George Naff's "Jubilant Dance and Serenade" for solo trumpet and wind ensemble at the North Carolina Music Educator's Association confenence in Winston-Salem, NC with the Piedmont Wind Symphony, Matthew Troy conducting. Subsequent performances of Naff's "Jubilant Dance and Serenade" were performed in 2018-19 with the Appalachian Wind Ensemble and the Symphony of the Mountains (re-orchestrated by the composer). Online in the summer of 2020, Stokes collaborated as a soloist with Hayes School of Music faculty for the Appalachian Summer Festival. Dr. Stokes can be heard in performance frequently at the Hayes School of Music on the ASU campus and with the Symphony of the Mountains.