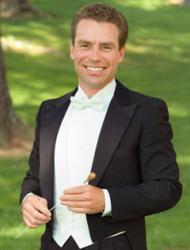 Dr. John Stanley Ross is Director of Bands and Associate Professor of Music at Appalachian State University where he conducts the Appalachian Wind Ensemble, the Appalachian Concert Band, frequently guest conducts the Appalachian Symphonic Band, teaches courses in wind literature and band techniques, and guides all aspects of the ASU BANDS program. The Appalachian Wind Ensemble was invited to perform at the Annual North Carolina Music Educators Association Conference in Winston-Salem in November, 2007. This performance featured the World Premiere of River Songs of the South by William Harbinson, and the North Carolina Premiere of Fildfire by Elaine Ross. From 2003-2006, Dr. Ross was Director of Bands and Orchestras and Assistant Professor of Music at the University of Minnesota-Morris where he conducted the University Concert Band, Symphonic Wind Ensemble, Symphony Orchestra, String Orchestra, and Chamber Winds and taught courses in conducting, woodwind techniques, fundamentals of music, introduction to music, and applied clarinet. In 2005, the UMM Bands enjoyed a successful tour to Hawaii where they performed on Oahu and Kauai in collaboration with the Royal Hawaiian Band and the Kauai Community College Wind Symphony. During his residence in Minnesota, Dr. Ross was also the music director and conductor of the Prairie Winds, an adult concert band located in Willmar, Minnesota, and the conductor of the First Lutheran Church Senior Choir in Morris, Minnesota.

Dr. Ross has performed clarinet with several ensembles including the University of Michigan Symphony Band, the Michigan State University Wind Symphony, the Traverse Symphony Orchestra, the Battle Creek Symphony, Quintessence Wind Quintet, and the Lawton Philharmonic and continues to perform as a recitalist. In 2005, Dr. Ross was inducted into the Phi Beta Mu International School Bandmaster Fraternity, and was honored with awards from Who's Who Among America's Teachers, and Who's Who In America. In 2004, Dr. Ross was inducted into the International Who's Who for Professionals. In 2003, he received the Minnesota Band Director's Association Award. On six occasions, Dr. Ross was honored with the Who's Who Among America's Teachers Award. In 1998, Dr. Ross was recognized as being a distinguished teacher in the arts by the National Foundation for Advancement in the Arts. In 1996, he was presented with the prestigious Citation of Excellence from the National Band Association.

During the 2002-2003 season, Dr. Ross was Director of Bands and Assistant Professor of Music at Cameron University in Lawton, Oklahoma where he conducted the University Concert Band, supervised student and first year teachers, and taught courses in chamber music, conducting, applied clarinet, secondary instrumental methods, woodwind techniques, and music appreciation. Also during this time, he served as Director of Music at First Presbyterian Church in Lawton, Oklahoma. From 1998-2003, he was the conductor and music director of the Grand Rapids Symphonic Band and Wind Ensemble in Michigan.

During the 2001-2002 season, John Stanley Ross was a visiting assistant professor of music at The University of Michigan-Flint where he conducted the University Wind Symphony and taught courses in conducting, chamber music, and performance practice.

From 1992-2000, he was the music director and conductor of the Interlochen Arts Academy Band and Wind Ensemble and instructor of conducting and music theory at Interlochen Center for the Arts. Under his direction, the Interlochen Arts Academy Band and Wind Ensemble performed to critical acclaim in many venues on tours including Hill Auditorium in Ann Arbor, Michigan as part of the 48th Annual Midwestern Conference on Vocal and Instrumental Music in 1993, and at the 50th Annual Mid-West International Band and Orchestra Clinic in Chicago in 1996. Numerous performances of the Academy Band and Wind Ensemble under the direction of Dr. Ross have been heard both on Interlochen Public Radio and on National Public Radio as part of their Performance Today series. The Academy Band performed four world premieres under the direction of John Ross during his tenure at Interlochen. At the Interlochen Arts Camp, he has guest conducted the National High School Concert Orchestra, High School Symphonic Band, High School Concert Band, and the Intermediate Band and was the instructor of the Advanced Conducting Class.