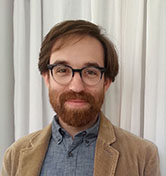 Nicholas Cline makes music for voices, acoustic instruments, and by electroacoustic means. Deeply influenced by the natural world, his music draws on a broad range of subjects and experiences with the belief that music reveals, challenges, and shapes the listener’s understanding of the world. Recent projects include collaborating with the Grammy award-winning choir, The Crossing, in a performance and recording of his work, Watersheds, for 24 voices, tenor saxophone, and live electronics.

Nicholas is dedicated to his work as a music educator striving to develop his students’ technical abilities, introduce them to new ideas, challenge them to question their assumptions, and encourage the cultivation of their individual voices as performers, composers, educators and scholars. As an Educational Teaching Technology Fellow at Northwestern University, he developed a suite of interactive learning applications for teaching music theory and music technology.

His music has been performed by Spektral Quartet, International Contemporary Ensemble, Ensemble VONK, Bienen Contemporary/Early Vocal Ensemble, Northwestern Contemporary Music Ensemble, Jeff Siegfried, Jena Gardner, Square Peg Round Hole, Stare at the Sun, Constellation Men's Ensemble, and F-Plus. His music has been presented at festivals and conferences in the US and in Europe and is featured on the SEAMUS electroacoustic miniatures recording series: Re-Caged. Nicholas has been an artist-in-residence with High Concept Labs and the Chicago Park District. Nicholas lives in the Blue Ridge Mountains of North Carolina with his wife Mallory.