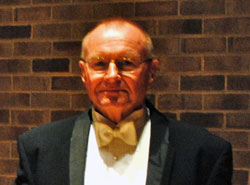 He is a graduate of Mars Hill College with a Bachelor of Arts Degree in Music Education. He was Band Director at Lincolnton High School from 1974 to 1994, where his bands received numerous Superior and Excellent ratings. Mr. Peach has served as Past-President of Northwestern District Band Directors Association and is a member of Phi Mu Alpha Sinfonia, American School Band Director Association, and North Carolina Music Educators Association. He has served as an adjudicator and presented various band clinics and workshops throughout the United States. Mr. Peach also served as the Curriculum Section Chair on the state task force that revised the music curriculum in North Carolina. In addition, he is the Assistant Director of the Spirit of America National Honors Band and Freedom Singers, which has performed throughout Europe in the summer. After formally retiring for public school teaching, Mr. Peach was an Educational Representative for Music & Arts Centers for six years.