The 27 guitarists of the orchestra, coached by Dr. Douglas James, Professor of Guitar, will present a program including many Celtic pieces as well as a range of classical guitar music and orchestral arrangements.

The program for the concert can be found here.

The members of the Appalachian Guitar Orchestra include music majors, music minors, and students from other degree areas who have an interest in music. Each piece is divided up into parts, sometimes as many as nine parts played simultaneously, with from one to five guitarists on a part.

Due to COVID-19 precautions, the guitarists did not meet in person, but recorded their parts separately, with accompanying video. "These recordings are a snapshot of the situation we're in right now - seeing students in masks, students in their rooms,” says Dr. James. The ensemble found creative ways to collaborate on an orchestral experience.

To sync up with their fellow musicians up over time and distance, the guitarists listened to click tracks on headphones while recording their parts. On some pieces, Dr. James “conducted” virtually by creating click tracks with his spoken cues at important junctures, much as one might hear in a live orchestra rehearsal.  Some pieces were recorded along with enhanced click tracks created in Finale music notation software in which the guitarists could also hear pitches as reference.

Alumni from the Music Industry Studies program at the Hayes School of Music mixed and edited the recordings, adjusting the balance to create a unified sound for the virtual orchestral performance.

The composer of Earthsong, Dr. Alan Hirsh, says, “Earthsong was inspired by a recent trip to the southwest Colorado Plateau, its massive sandstone cliffs, canyons, and expansive skylines. An undulating rhythm at the outset sets a calming tone and represents Earth rotation. The work showcases a variety of guitar colors including harmonics, chordal blurring, and campanella (harp-like).”

To hear and see the Appalachian Guitar Orchestra’s program, tune in to the Hayes School of Music Performances page on Thursday, April 22, 2021 at 8:00pm. 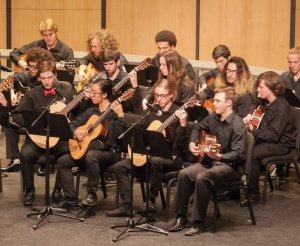 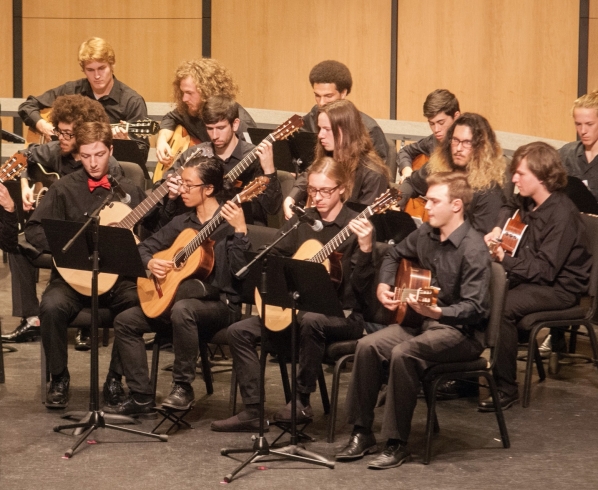