Ludwig van Beethoven (1770-1827) is one of the few composers that everyone knows. Whether it's just the first four famous notes starting the Symphony No. 5 or it's his compositional output, Beethoven is the epitome of musical genius.

"Music is the mediator between the spiritual and the sensual life," Beethoven once wrote. How lucky we are to still be performing music that expresses this mediation, this totality of human emotion! Certainly a unique year for all of us, 2020 also marks 250 years since Beethoven's birth (his sestercentennial).

The Hayes School of Music at Appalachian State University is celebrating along with the rest of the musical world by presenting a faculty series of all Beethoven concerts. Born in Bonn, Germany, Beethoven was the master of all of music's forms and enjoyed great fame in his adopted city of Vienna. There was never a time quite like Beethoven's, when a composer and his audience shared such a close relationship. On pins and needles, the general public would await new music from the famed composer in the same way that, in 2020, we may anticipate new episodes of our favorite shows.

We think that the selections of music we present show the dazzling variety of Beethoven's repertoire; it is with great excitement that we share it with our audiences. Now, 250 years since his birth, the Hayes School of Music faculty offers not only the joy of hearing music that has stood the test of time, but also presents an opportunity to explore our current challenges through music from another time.

While we celebrate the life and contributions of the composer, we celebrate even more broadly the experience between the performer and audience that can only be shared through music. We hope you will join us for these performances of some of Beethoven's great works. Let yourself be carried away by the composer who invites you to share in our common humanity through his music, Ludwig van Beethoven.

October 4, 2020
We open our festival featuring two solo piano sonatas, the unusual two-movement Op. 54 and the second sonata from Op. 31, the “Tempest” Sonata. Abram Chasins called this piece, "unbuttoned Beethoven" because of it's rollicking, joke-filled character. The Serenade for Flute, Violin, and Viola was 26-year-old Beethoven's effort to create a real "crowd pleaser." It did, earning him good money and lots of performances. Finally, how could we NOT give you the famous 5th Symphony? Well, we close with this very piece, but don't expect an orchestra...it's arranged for two intrepid pianists at two pianos!

October 11, 2020
A Bagatelle is a short piece "just for fun;" a trifle, to use a rather old-fashioned word. Beethoven liked the small forms as well as the big ones and, true to form, he wrote several sets of bagatelles. The set, Op. 33, shows why he was considered such a renowned improvisor in his day, as they sound that way...improvised! On a similar light note, we offer you the buoyant Trio for Clarinet, Cello and Piano, written when Beethoven was 27. Brilliant, accessible none-too-serious but deeply melodious, this one was, and is, a crowd pleaser. The program is rounded out with the composer's only venture into the newly minted form of the "song cycle." Suffused with a longing "for the distant beloved," Beethoven ruminates over the age-old predicament of a love that is not, or cannot, be returned. In his hands, the bitterness of this state of mind is transformed into sublime art.

October 18, 2020
We might call this program "bookends," because it features works that span a lifetime of creative work. Unusual instrumentation for Beethoven, the trio for flute, bassoon and piano was probably written when he was 15, intended for a member of the minor nobility who was an amateur bassoonist and his daughter, who played the flute. The piece was not actually published until the 1880s, having been lost in the shuffle of the composer's notoriously messy desk only! The other side of the bookend is the sublime and masterful Sonata for Piano, Op. 110, number 31 out of 32 sonatas for the instrument. In between? A delightful rondo marked "moderato grazioso," moderate and graceful; perfect counterpose to the profundity of Op. 110.

October 25, 2020
We end our tribute to the great German composer in a retrospective way; two early works and a late one. If you enjoy the previous concert we offer, you can go deeper in your appreciation of early Beethoven style and late. Based on a duet between two young lovers from Mozart's opera, Magic Flute, the composer treats his variations as a true duet, the two parts lyric and decorated, pirouetting between instruments in perfect balance. The early String Trio shows the composer painting on a large canvas, four substantial movements that foreshadow his large-scale treatment of the string quartets. The piano sonata, Op. 109, is beautifully lyric, dramatic and, what can one say, utterly sublime, fading softly like a prayer at its close. 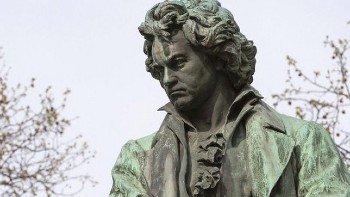 With the same spirit that drives great movements of social justice in any era, Ludwig van Beethoven's life work was animated by the highest ideals of humanity; ideals that he shaped and elevated through a unique musical voice. Beethoven's cry for equality and justice through music was tempered by a capacity to celebrate all of human emotion, from joy and humor to melancholic struggle. Perhaps most importantly, Beethoven offers us an experience of the sublime, greeting us across the ages with a message that transcends human language: all will be well in a world of universal community.

Beethoven's early years were characterized by struggle. The son of an alcoholic father who had trouble keeping his job as a court musician, Beethoven was forced to assume an adult role at the age of only 12, even begging his father's employer to keep him on despite his bad behavior.

While still in his 20s, he left his native Bonn for Vienna, the musical capital of Europe. Immediately seeking the attention of rich and cultured nobility, he wrote works aimed at gaining public favor and established himself as a regular performer in the aristocratic salons that proliferated in late 18th-century Vienna. He was aware of his transcendent gifts and refined them, over many years, through serious and sustained musical study.

As the 19th century dawned, Beethoven already enjoyed a strong reputation as a composer, taking each musical form (symphonic, solo or duo instrumental, chamber) and stamping it with his own unique mark. In the process, he greatly increased the scale and scope of each genre. He did this systematically, always interested in getting the full capacity out of each form, at the same time insisting on his own artistic and financial independence.

Beethoven went deaf gradually, starting in his early 30s. This drove him to despair, even to thoughts of suicide. Yet he endured and continued composing timeless, and still cherished, music. Ludwig van Beethoven the man had to endure more than his fair share of hardships, extending to his social circles, which he was often viewed as “difficult.” Ludwig van Beethoven the artist gave the full measure of his being, leaving us with a musical evocation of brotherhood and joy through the poetry of Schiller, whose "An die Freude" (Ode to Joy) the composer chose as the final movement of his 9th, and last symphony.

There are various theories on Beethoven's final illness that finally ended his life on March 27th, 1827. What we do know was that the composer had severe abdominal swelling that caused him much discomfort and that minor surgery was performed to alleviate the problem (and may have resulted in infection). But the circumstances of his death are not nearly as significant as the public response after his passing. Contemporary reports range from 10 to 30 thousand persons following the funeral cortege, theaters were closed, and Europe's musical capital was in mourning.

To this day Beethoven's legacy lives on in music and in culture broadly through memorials, celebrations of his birthday (like our Beethoven 250! series!), sampled by pop artists, in film — over 1,500 films and television shows, and there's even a crater on Mercury named after him!