How do you decide who will go first? How do you learn the games? When/where are games played?

Discuss the games children name and the information about the games given by students. 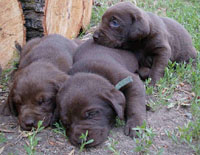 Some games have been around since before our grandparents were children. These games were played in the Kentucky mountains, and many had rhymes and songs.

Optional activity: Using the "Three Little Puppies Rhyme", inivite children to select a percussion instrument for each phrase. As some children chant the words, others add the sound effects with instruments.

We can also sing and play a guessing game at the same time. This way everyone plays together and takes turns guessing.

Some songs turn into stories, and we act out the story as part of our play. Sometimes, people used to call these singing games "plays".

Discuss the characters so that children can play roles of characters. (The boy could be singing "Roger is Dead.") Remind students that stories used to be called "tales" and often, events happened to a boy named Jack. Children improvise actions to accompany their story. (This plants seed for children to create their own tale!)

Smithsonian Global Sound recordings list samples of music you can hear. You will hear enough of the song to learn the melody and teach it to your students.

If you want to purchase the entire album, follow the links to make your purchase.

‹ Lesson 2: Playing and Singing in the Mountains