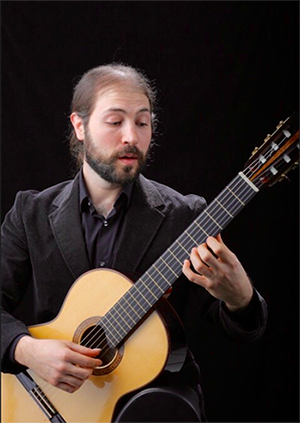 Robert Wuagneux has been equally at home in the performance and instruction of classical, jazz, and popular styles of guitar for over a decade. As a classical guitarist, Robert has given recitals at venues in Sorrento, Italy, New York City, and Los Angeles, to name a few. As a guitarist in popular styles, Robert has been featured on a number of albums ranging from indie rock to bluegrass. See below for links to samples.

Robert holds a master’s degree from Appalachian State University (2015) as a student of Dr. Douglas James and is a recipient of the Cratis D. Williams Award for Outstanding Graduate Students. Currently, Robert is a PhD candidate in music history and theory at Stony Brook University in New York. His research focuses on analysis of music in just intonation, as well as the music, affect, and cultural phenomenon of Phish.