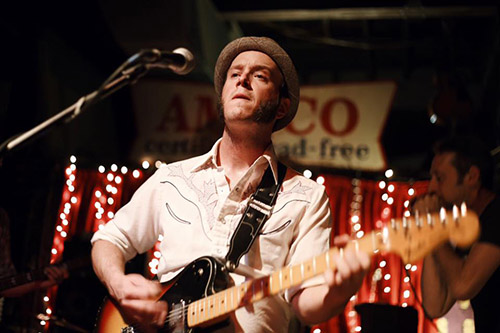 Dave Brewer is a whirlwind of musical activity both on stage and off. Working as a vocalist, multi-instrumentalist, manager, talent buyer, festival promoter and radio DJ, the Clemmons, NC native and longtime High Country resident has immersed himself in the local and regional music industry on a variety of fronts for more than two decades.

As a performer, Brewer can be seen regularly with: Possum Jenkins, Soul Benefactor, The Worthless Son-In-Laws, The Junaluska Gospel Choir (at Boone's Mennonite Brethren Church), Dave Brewer's Foscoe Four, The King Bees, The Moravian Buns and The Dead of Winter. In 2014, Brewer founded the Carolina Ramble & Reunion, an intimate, family-oriented music festival that takes place each fall just outside of Boone, in the Bethel community of Watauga County. Brewer's company, Carolina Ramble Productions, serves as the talent buyer for the festival, as well as for a growing roster of clients including Valle Crucis Community Park and High Country BeerFest.