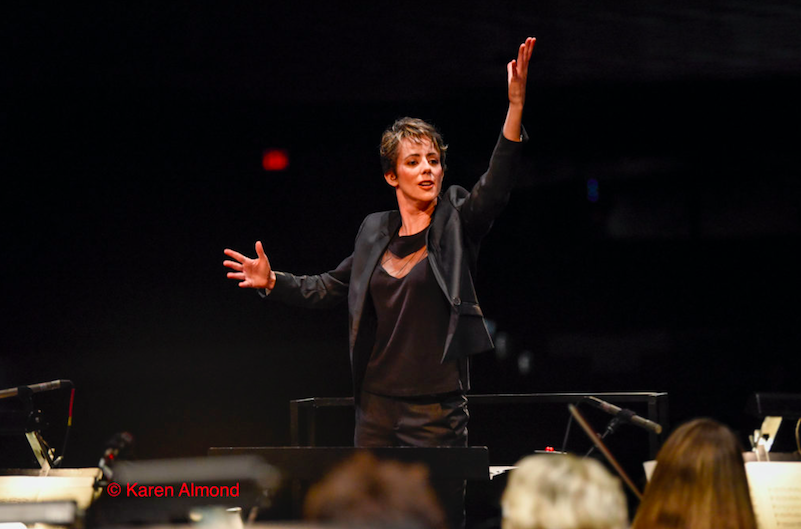 French conductor Mélisse Brunet living in Boone, NC is quickly gaining attention on both sides of that Atlantic as a “skilled and polished conductor with panache” (ClevelandClassical.com). She is the new Music Director of the Northeastern Pennsylvania Philharmonic, an orchestra made of freelance musicians from the NYC and Philadelphia areas. A protégée of Pierre Boulez, she is one of the twelve conductors selected for the first Conducting Competition La Maestra that will be held in Paris in September 2020. Ms. Brunet was one of the six conductors selected for the 2018 Bruno Walter National Conductor Preview, chosen for their “experience, talent, leadership potential, and commitment to a career in service to American orchestras.” In 2017 she was one of the six women conductors chosen for the international Hart Institute for Women Conductors at the Dallas Opera in 2017, selected over 161 applicants from 33 countries. She is currently in her second season as Interim Music Director of the Northeastern Pennsylvania Philharmonic, USA.

Her concerts this season included a return engagement as guest conductor at the Cleveland Institute of Music; and a début with the West Virginia Symphony, featuring Beethoven Symphony No.6 and Torke’s newest Violin Concerto Sky. She recently made her successful début with CityMusic Cleveland in five concerts featuring the Saint-Saëns Cello Concerto no. 1, his less-known Second Symphony, and Kodàly’s Galanta Dances.

As a dynamic advocate of contemporary music, Brunet has collaborated with composers such as Steven Stucky, Michael Daugherty, and Jennifer Higdon, among others. In 2014 she was a selected conductor at the prestigious Cabrillo Festival for new music in California.

As an opera and music-theatre conductor, Brunet has conducted Dead Man Walking by Jake Heggie and Puccini’s Gianni Schicchi at the Power Center in Ann Arbor; four staged performances of Mozart’s Die Zauberflöte; and Bernstein’s Trouble in Tahiti, Menotti’s The Old Maid and the Thief, Sondheim’s Sweeney Todd, and Strauss II’s Die Fledermaus in Boone, NC, and will be part of the Music Team at the Dallas Opera, TX, for the production of Pulcinella/Voix Humaine.

Since finishing her doctorate in 2016, Brunet has served as Director of Orchestral Activities at the Hayes School of Music at Appalachian State University, and the Music Director of the Appalachian Symphony Orchestra.  There she conducts all of the symphonic concerts, operas, and musicals, and received the prestigious 2019 Outstanding Teaching Excellence Award. By instituting a rigorous, caring, and inspiring coaching method with her players, she has won attention for having transformed this orchestra. In 2019-20 she will lead this ensemble in Beethoven’s Symphony No.5, Joan Tower’s Fanfare for the Uncommon Woman #1, Mason Bates’ The B-Sides, Stravinksy’s Rite of Spring, and Tan Dun’s The Wolf, among others.  The local press has noted, “The Appalachian Symphony Orchestra is currently at its peak of creativity, under the guiding baton of Mélisse Brunet. Like an up-and-coming football coach, Brunet carefully crafted her “team” into a cohesive, winning ensemble, from the grassroots to the top. And her combination of a bubbly, energetic personality and technical musical skills have quickly found a home on this campus. Brunet’s reputation as one of the world’s top, young female conductors continues to grow, and the biggest question becomes how long will audiences be able to enjoy this incredible Paris native and her talented orchestra?” (Blowing Rock News, 2019).

A native of Paris, Brunet began her studies on the cello, and also learned to play the trumpet, French horn and piano. She holds diplomas from the Paris Conservatory and the Université la Sorbonne, as well as a Professional Studies diploma from the Cleveland Institute of Music and a Doctorate in conducting from the University of Michigan.  Aside from Boulez, her mentors have included Kenneth Kiesler, Lawrence Loh, and Joel Smirnoff. She also took part in international workshops where she studied with Marin Alsop, Gustav Meier, David Stern, and Jorge Mester.  She studied French, English, German, and Italian lyric diction, and she speaks English, French, Italian, German, and is learning Mandarin.