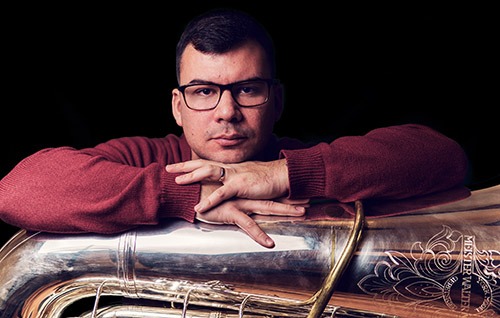 A native of Recife, Brazil, Joseph Guimaraes immigrated to the United States with his family in 1998. He was introduced to classical music by his grandmother at the age of four and began studying the tuba at age fourteen.

Guimaraes joined the United States Navy Concert and Ceremonial Band in Washington, D.C., in October of 2020, and the faculty at Appalachian State University's Hayes School of Music as Adjunct Professor of Tuba and Euphonium in the Fall of 2021, where he teaches alongside Professor Bethany Wiese.

In 2017, he received the Paul and Daisy Soros Fellowship for New Americans in recognition for his philanthropic efforts through his foundation, the Mouthpieces for All Initiative, garnering national praise and attention from The New York Times, The New American, The Paul and Daisy Soros Foundation, Yale University News, Yale University School of Music, Lynn University's iPulse, and the Chronicle of Higher Education.

In 2019, Joseph earned the silver medal in the artist division solo competition at the Leonard Falcone International Euphonium & Tuba Festival and the gold prize at the 2017 NERTEC Solo Artist Competition Ithaca, NY.

In 2015 Guimaraes launched his company The Valve Beanie and founded the Mouthpieces for All Initiative (MPFAI). MPFAI is a project whose mission is to promote and encourage music education to youth while focusing on specific training aspects that can inform life choices outside of the arts. Since its founding, MPFAI has donated over twenty thousand dollars of equipment to deserving students both in the United States and abroad.

He is an avid conductor who has worked with groups such as the Lynn University Philharmonia, The University of Georgia's Low Brass Ensemble, the All-City Honors Ensemble in New Haven, CT, and the Florida Mandolin Orchestra while serving as its director. Joseph is incredibly proud of his collaboration with renowned Igor Stravinsky scholar David Noon during the 2015 New Music Festival and the 2016 Stravinsky Symposium hosted by Lynn University's Conservatory of Music.